The theme this year is
​
"The Art of Resistance" 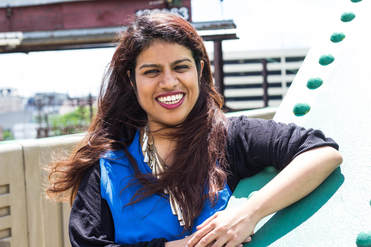 Founder and Executive Director of Art and Resistance Through Education (ARTE)
​
​Marissa Gutierrez-Vicario is the Founder and Executive Director of Art and Resistance Through Education (ARTE). As a committed human rights activist, artist, educator, and advocate for youth, Marissa launched ARTE in 2013 to help young people amplify their voices and organize for human rights change in their communities through the arts. Since early childhood, Marissa became interested in the arts and its potential in bringing attention to important social issues within her community. At an early age, Marissa also developed the propensity to lead as a student activist and public servant through her involvement in several non-profit organizations, including: United Students Against Sweatshops, the Advocacy Lab, Public Allies New York, and Global Kids. In all of these experiences, Marissa realized the need to support young people in their development as organizers to help cultivate the next generation of social justice leaders.
Growing up in southern California, Marissa became active with the Unitarian Universalist Association, a faith-based, social justice community and the Unitarian Universalist Service Committee (UUSC), a human rights organization, where she served as a Board Observer. Marissa currently serves as a Program Leader and as a member of the Advisory Board for the Unitarian Universalist College of Social Justice. Marissa also serves as the Vice President of Recruitment and Outreach for the Unitarian Universalist Women's Federation.

As someone who is interested in building a global community of human rights activists and educators, Marissa has traveled to nearly 50 countries and has presented workshops in several, including South Africa, Cyprus, and Canada. In 2011, Marissa presented at the Council of Europe’s symposium on “Human Rights in Education,” at the European Court of Human Rights. In 2016, Marissa was awarded a fellowship with the United Nations Alliance of Civilizations to travel across the Middle East to understand how to promote peace and address xenophobia across cultures. In 2016, Marissa was selected as an Ashoka Changemakers and American Express Emerging Innovator for her work as a social entrepreneur. Marissa also currently serves on the Steering Committee of Human Rights Educators USA. Most recently, Marissa was named as a Catherine Hannah Behrend Fellow in Visual Arts Management in the 2018 92Y Women inPower Fellowship Program.
​
Marissa has written several publications focusing on the intersection of human rights, art education, and youth development, including the Huffington Post and Radical Teacher. Currently, Marissa serves as an Adjunct Lecturer at the City College of New York in the Art Education Department.

Marissa holds a B.A. in Political Science and International Relations, from the University of Southern California, an M.P.A. from the Wagner School of Public Service at New York University, and an Ed.M. from the Harvard Graduate School of Education.
One of Marissa's favorite public art pieces is by French graffiti artist, J.R., called Women are Heroes. To contact Marissa, please e-mail marissa@artejustice.org. 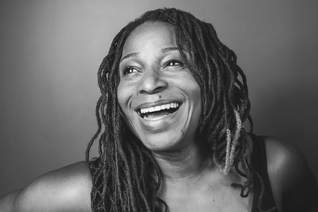 As an theater artist Tanisha has produced, directed and performed for many regional theaters across the country, including  Arena Stage; Commonweal Theatre; PCPA Theatrefest, Target Margin Theatre and with Black Women Artists for Black Lives Matter and many others. She has directed children’s theater, as well as, produced shows at Performance Space 122, Baltimore Theater Project and others. She most recently directed Taja Lindley’s The Bag Lady Manifesta at Dixon Place; and is currently conceiving bathtub: a multimedia performance installation event of radical intimacy and surrender by inviting an audience to experience a bath with a Black woman; and Iona Flies Away, a musical, storytelling project with singer-songwriter Kelly Erin Sloan.

Tanisha began working with film/video while creating and performing in an original interdisciplinary media-theater-dance piece Memory is a Body of Water (with Lisa Biggs, PhD and Kristin Horton, Dir.) for The National Black Theater Festival. She went on to work for several production companies and landed on the production team for PBS’ Citizen King. Her experimental shorts flag/body has been screened at international conferences in Australia and Denmark; GroundWater was screened as a part of an intercontinental artist exchange in Panama co-sponsored by the U.S. Embassy in Panama. Her feature length documentary Walk With Me (directed & produced with Ellie Walton), received an Outstanding Documentary Award at Our City Film Festival in DC and was picked up for distribution by Filmbreak/GoDigital and can be seen on Amazon, KweliTV, Google Play and other outlets. She is currently producing Brave Girls about young women in a conservative town in India and is part of JD Urban’s documentary project the Revolution is Uncomfortable.
​
Tanisha holds a BFA Theatre performance with a concentration in Holistic Drama from Arizona State University, an MA in Media Studies from The New School and is an LMSW -Clinical focus from Hunter College. A member of Actor’s Equity Association, her work has been recognized through an Artist’s Fellowship from the DC Commission on the Arts and Humanities, the Puffin Foundation, the National Endowment for the Arts, and the Humanities Council of DC. She was a 2015 TMT Institute Fellow at Target Margin Theater, 2016-2018 Artist in Residence at the Brooklyn Arts Exchange (BAX) and is a resident artist at the Second Ward Foundation in Hudson, NY. She is  a 2017 MAP Fund grantee for bathtub sponsored by BAX.

EBD Celebration: April 17th, Social Justice and Women's And Gender Studies students will present their poster presentations on "The Art of Resistance." Keynote address is on Thursday, April 19th at 6:30 in Wheelwright Auditorium. Keynote address is Bree Newsome, filmmaker, musician, speaker, and activist from Charlotte, North Carolina. A reception is immediately following the event. The event is free and open to the public.

This is Loyola’s second annual Ella Baker Day, and the event will be held on Thursday April 5th at 6:30pm at WombWork Productions, Inc.’s Black Box Theatre (https://www.wombwork.com/home/), located at 3121 Walbrook Ave. The event is a social-justice themed art contest for Baltimore City middle and high school students. There is a $200 prize for middle schoolers and a $250 prize for high schoolers 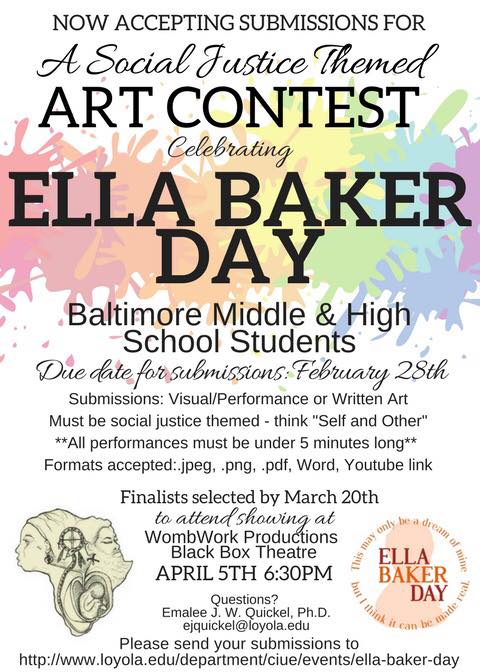 Students in Renton Technical College's high school completion program have started an "Ella Baker Garden." They are growing vegetables with plans to donate their harvest to Elijah's Food Pantry on campus. They have started with seedlings indoors and are learning about the spirit of participatory democracy as it relates to their lives, not just within government. When the weather permits, they are making a day of planting the indoor seedlings outside into the garden bed and continuing the tradition each year.
​
For more information contact Ali Cohen at acohen@rtc.edu